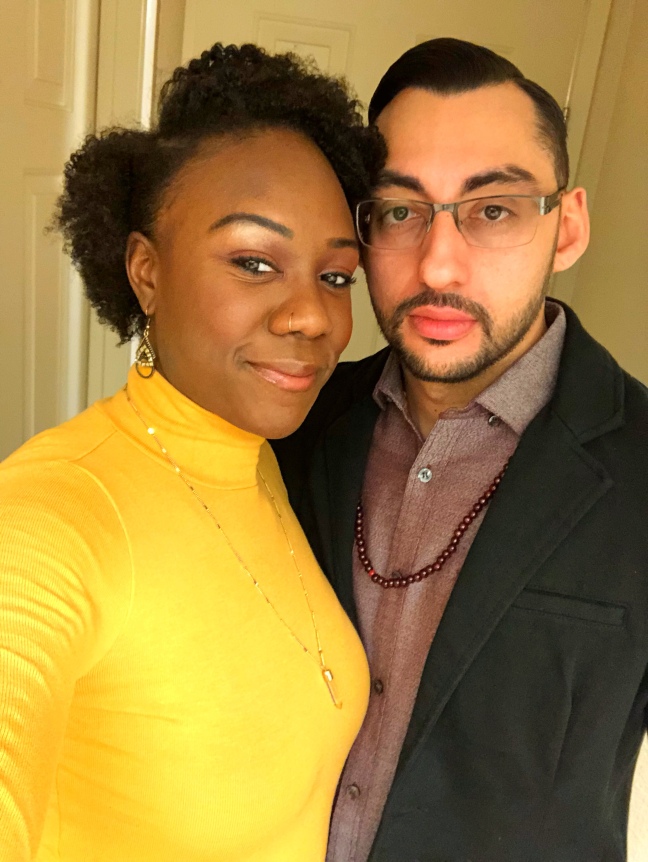 We decided to celebrate our wedding anniversary with a week long vacation in Las Vegas and it was amazing! Keep reading below to see all that we did!

My husband is a big superhero fan so we had to check out the Marvel Station! It was a fun experience to see the origins of all the superheroes!

We then went to the movie theater and watched Glass. It’s a movie based off of two previous movies, Split and Unbreakable. If you haven’t seen them, make sure you check these thriller, action packed movies! 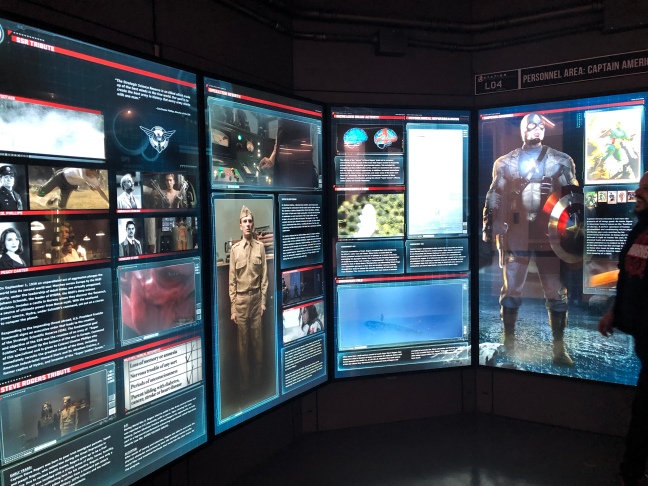 Today makes 4 years that we’ve been married! I can’t believe it’s been that long! But time flies when you are married to your best friend! =)

Earlier in the day, we went to the Pinball Hall Of Fame! They have like 5 rows of a variety of pinball machines along with other games like driving games, air hockey, ms Pac-Man, and Supermario to name a few. There were pinball games like game of thrones, bad cats, and they had a row or two or retro pinball games from the 1960s! It’s so crazy that these antique machines are still in such good shape! Being here brought us back to our childhood so we had a blast!

We ordered Calamari for our appetizer which is always a go to for us! For my entree, I ordered the NY Strip Steak and my husband ordered the Porterhouse steak with a side of sautéed button mushrooms and onions. The waiter also brought us complementary spaghetti!

January 23 Wednesday
My husband is a big Dragon Ball Z fan so we went to see that movie at The Orleans, which is a huge building that has New Orleans themed décor. It also had a casino on the first level and the bowling alley was located upstairs, so it was a one stop shop for us haha! We couldn’t leave without bowling so we played 2 games and I won both times! yay haha! I was surprised because I don’t consider myself a pro or anything, but I think I had the best bowling scores this day!

After that, We went to the Sharf Reef Aquarium which was located in the Mandalay Bay Hotel. 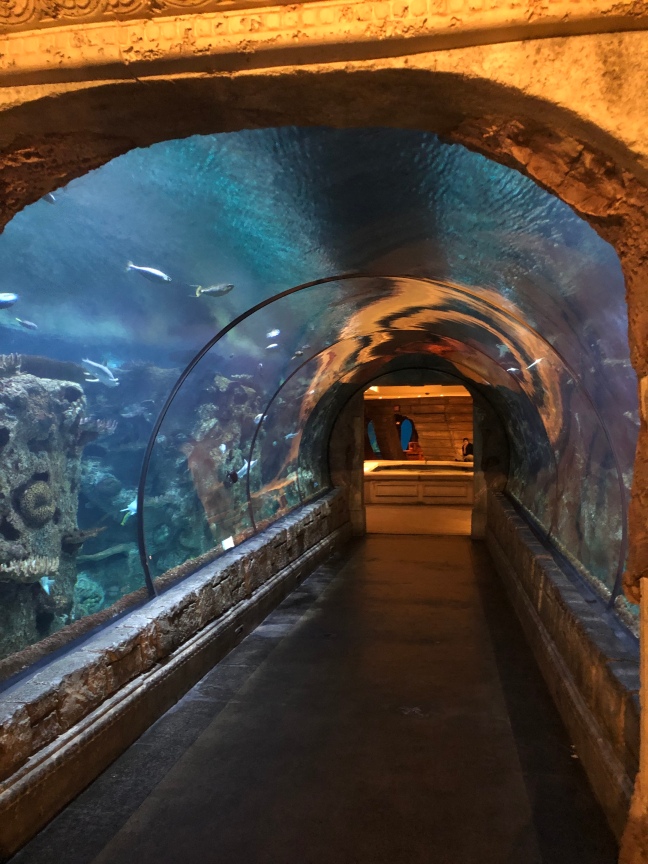 January 24 Thursday
We decided to go to the gym in the morning to do a quick workout. Just wanted to make up for all the delicious food and drinks we’ve had so far this week!
Later that night we went to the MGM Grand hotel which is where they host the boxing fights. We were told by one of our Uber drivers to check out this nightclub called Hakkasan. As we are walking in, we were greeted by a promoter who added us to the guest list of the same club and gave us a free drink ticket! I definitely wasn’t expecting that but it surely was a nice surprise! Hakkasan was huge and was crowded too but we had a good time there! I enjoyed my free drink! Haha!

January 25 Friday
We went back to the strip and headed to the MGM Grand hotel again. What made us come back was the fact that they had a gaming area which had pool tables, jumbo Jenga, Ms. Pacman, air hockey, and basketball games. My husband and I can get really competitive at times so this was just the right place for us! 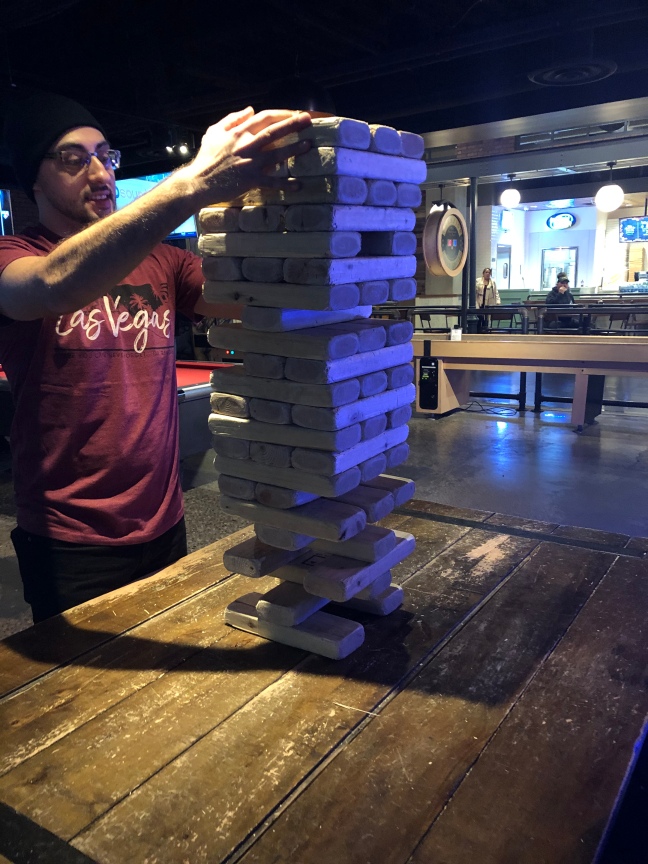 To finish the night, we went to the casino of that same hotel and played a few games like Black Jack, Keno, Roulette, etc. We’re not big gamblers but we wanted to give it a try plus we knew the waitresses would give us free drinks for playing! I didn’t win a lot of money but I won about $12 so that’s a good start! LOL
First Impression Of Vegas
I thought that January would be a slow month for Vegas since it’s winter time and I THOUGHT there wouldn’t be much going on but I was wrong LOL. Our flight to Vegas was jam packed which was unexpected. We arrived in Vegas and saw so many people it was almost like being back home in NYC! So I’ve come to the conclusion that there is rarely a slow month in Vegas and it’s always a reason to go to Vegas no matter what time of the year it may be! So if you go, be prepared for that!
We didn’t rent a car and decided to Uber everywhere. When I would order our Uber, it would arrive in like 2-3 minutes! I wasn’t used to that because I’m used to waiting at least 10 minutes for an Uber in NYC! So that is a very convenient perk about commuting in Vegas.
The weather while we were there was 55-60 degrees Fahrenheit so it was light jacket weather which was great because we were walking around a lot.

I felt like we did a lot of things but there is still so much more I want to do! This was my first time going to Las Vegas and I had such a great time! I can’t wait to go back!
Have you ever been to Vegas?! If so, what was your best memory?! Comment below!
You can check out more videos on my Instagram page here!