If you’re a longtime follower, then you know that I love Japanese style ramen! It’s has so many vegetables and savory flavors that leaves me full and satisfied! =)

What did you have for dinner tonight? 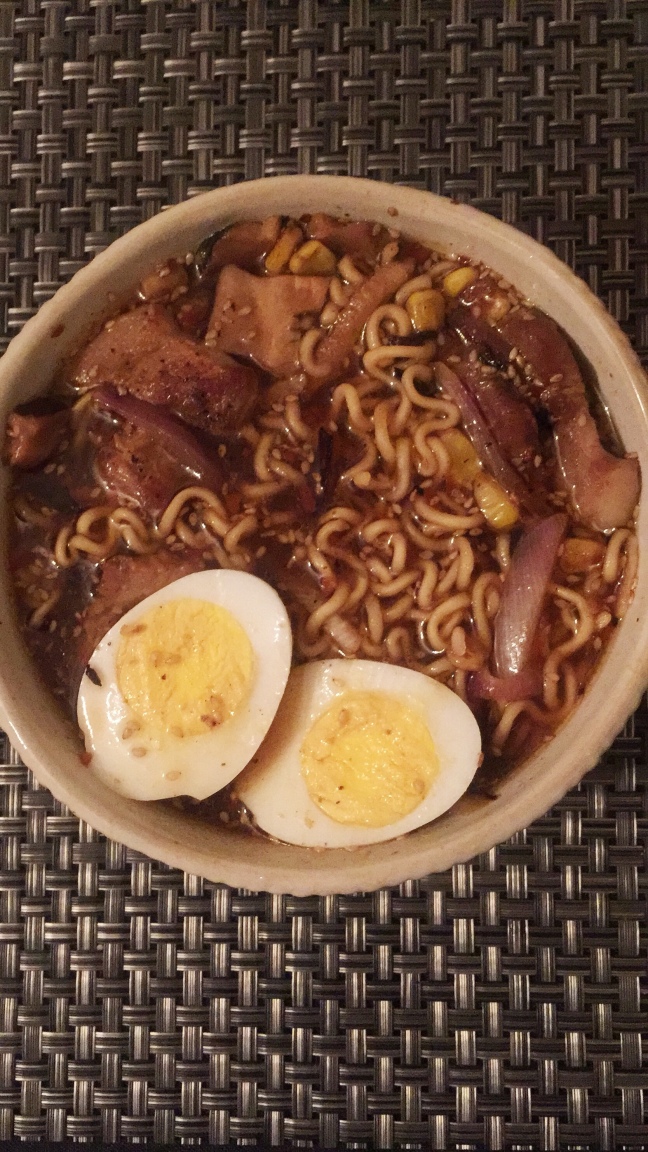 My husband made a delicious meal of Pork Ramen Noodle Soup last night!

This was his first time making ramen and he did a really good job!

I made this for dinner last night because it’s super easy to make and quick to prepare!

It was so delicious! 😋 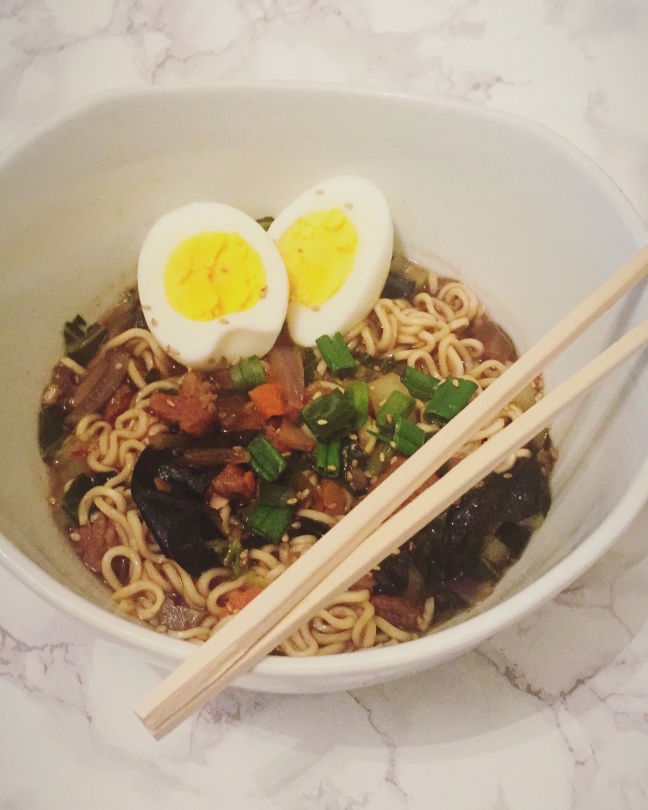 I made a Steak Ramen Bowl with a side of spring rolls for dinner last night! OMG it was delicious! My husband went back for seconds so I know it was tasty lol!

What’s the best Ramen Bowl that you’ve ever had?! Comment below! 😊 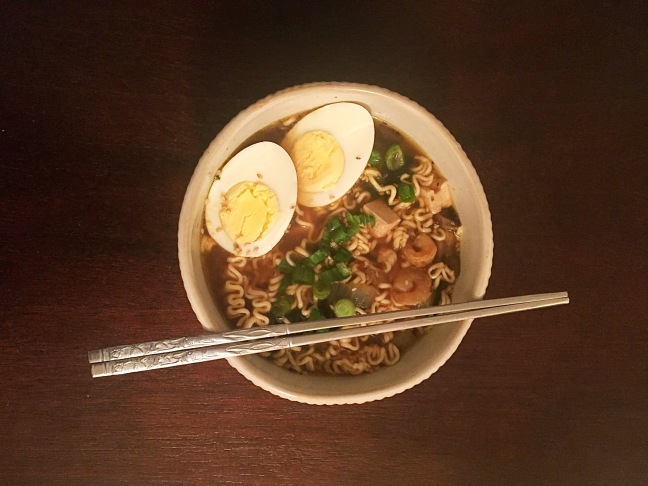 I made Shrimp Ramen for dinner this week! Usually when I make ramen for dinner, I normally use either prom or chicken for the protein. But I wanted to switch it up a bit and use shrimp this time!

I also cut tofu into cubes and seasoned with garlic powder, salt and pepper, and marinated in teriyaki sauce.

I also added the marinated chopped tofu into the pan with the shrimp and let that all cook together. I then added the shrimp and tofu to the slow cooker with the veggies and stock and let all the flavors marinate for about 20 minutes.

You can then serve with ramen noodles, add a boiled egg (optional), and top with scallions and sesame seeds! 😋

My husband and I decided to go to a local restaurant called Roc N Ramen!

They serve a variety of ramen bowls with different meats and ingredients to choose from!

As an appetizer, we ordered chicken gyoza! Mmm delicious!

Everything tasted amazing! This is one of our favorite spots to eat! If you’re ever near New Rochelle, NY be sure to visit Roc N Ramen! You won’t be disappointed! =) 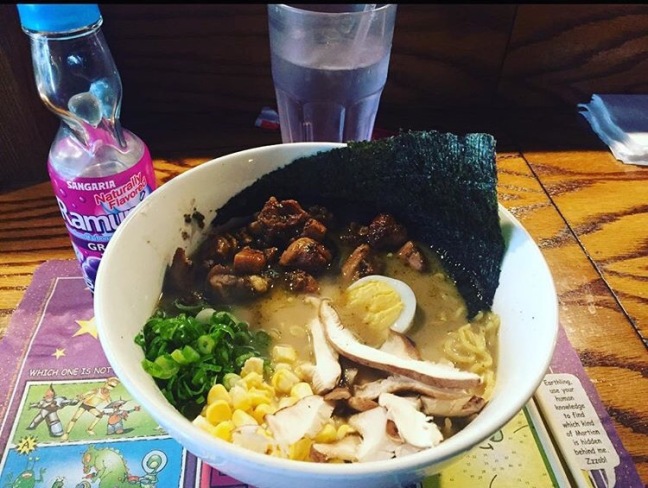 I mentioned in my Spicy Pork Ramen post that I love Asian cuisine! So many great dishes to choose from, and it’s good for your health too!

My husband loves watching Anime and in the shows, one of their normal food of choice is ramen noodles and that’s something he always wanted to try. We actually found a place in New Rochelle, NY that serves this dish!

When we arrived, we saw that they had an open kitchen where they make the food right in front of you! That was a plus because I knew the food would be fresh! They had a bar area with stools in front of the cooking area which is where we decided to sit. There was also the option to dine at regular tables within the restaurant as well.

First we ordered Chicken and Pork Gyoza for our appetizer. It was so good!

For our entree’s, we both ordered their Jerk Chicken Ramen and I had a Japanese Ramune soda to go along with my meal!

The ingredients included: jerk chicken, shiitake mushrooms, corn, green onions, a boiled egg, and seaweed. Ohh my gosh it was so delicious! The flavors all came together so well and it had the right amount of spiciness too!

We definitely had a great experience dining here! The food was delicious and the staff were friendly and welcoming! We’ve been here about 3 times already and plan on going back for more! If you’re ever in the area, make sure to stop by and get a taste of the yummy goodness at Roc N Ramen! You won’t be disappointed!

(Picture above is of my homemade Spicy Pork Ramen Soup)

One of me and my husband’s favorite things to do is to eat! We love eating Asian cuisine! It is so colorful, filled with flavor, and most of it is very healthy. So I decided to make a Japanese Ramen Dish for dinner one night.
My husband found the recipe in a food magazine he was browsing while we were waiting in line at CVS. He said “Ooo Babes, take a picture of this recipe! We should try and make this at home!” It was a recipe of Spicy Pork Ramen Soup. He said that he wanted to make it. So we went to the store to gather all the ingredients. But a week went by and he still hadn’t made it. I was getting impatient and told him that I would make it. LOL!

The recipe required cooking seasoned pork and onions in a skillet and place to the side once cooked.

Then I had to add water, chicken stock, and soy sauce to the slow cooker for the base of the soup.

I twisted the recipe a bit so I added mushrooms, fresh ginger, and grated garlic to the slow cooker.

I combined the pork and onions with the ingredients that were already in the slow cooker. The food cooked on high for about 5 hours. When the timer was at about 2 hours left, I added baby bok choy. When it was about 15 minutes left I added 2 packs of ramen noodles(I left out the chicken seasoning that came with it).

Then it was all done. I added a boiled egg to my bowl and dressed my soup with some sesame seeds as well as cayenne pepper for an extra kick of heat! It was so yummy! My husband and I scarfed it down in like 2 seconds! Ha! I will definitely be making this soup again in the near future!

If you would like the full recipe from the magazine, just let me know!

Have you made ramen dish before? If so, feel free to share your recipe! I would love to try it out and maybe even blog about it!